EHC Round Table on Women and Bleeding Disorders: A Call to Action

Home > EHC NOW! > EHC Round Table on Women and Bleeding Disorders: A Call to Action

EHC Round Table on Women and Bleeding Disorders: A Call to Action

On June 19th, the European Haemophilia Consortium (EHC) held a Round Table on Women and Bleeding Disorders in the European Parliament, bringing the important topic into discussion with Members of the European Parliament (MEP), patients, health care providers and representatives of the pharmaceutical companies. Chaired by MEP Jana Žitňanská (European Conservatives and Reformists Group, Slovakia), the event was also supported by MEPs Nessa Childers, Norica Nikolai, Dr Miroslav Mikolášik and Dr Cristian Bușoi, the last four of which are part of the MEP Group on Rare Bleeding Disorders that works together with the EHC to address challenges faced by the community on a European level (meet the members and hear what their goals for the group are here).

As data evidence is imperative for pushing for improvements and change, the event was a powerful testimony to the barriers women with bleeding disorders face and how these issues have long been overlooked. Though concrete data and research is still lacking, medical experts presented statistics around what is currently known. Beyond the diagnosis and treatment challenges, Professor Roseline d’Oiron, EHC Medical and Scientific Advisory Group member, pointed out that this patient group has to battle through discrimination on a regular basis:

“Just imagine that a woman arriving in an emergency room with abdominal pain, related to her bleeding disorder, will have to wait on average 30 minutes longer compared to men because it is “normal” to have abdominal pain if you are a woman. And then there is a decreased quality of life that is directly related to the heavy menstrual bleeding. And this is coming every month, it is not like at the same level, when you have 20 % of factor VIII, for example, in a man, he will not have this challenge each month. It is really important to emphasize this point.” 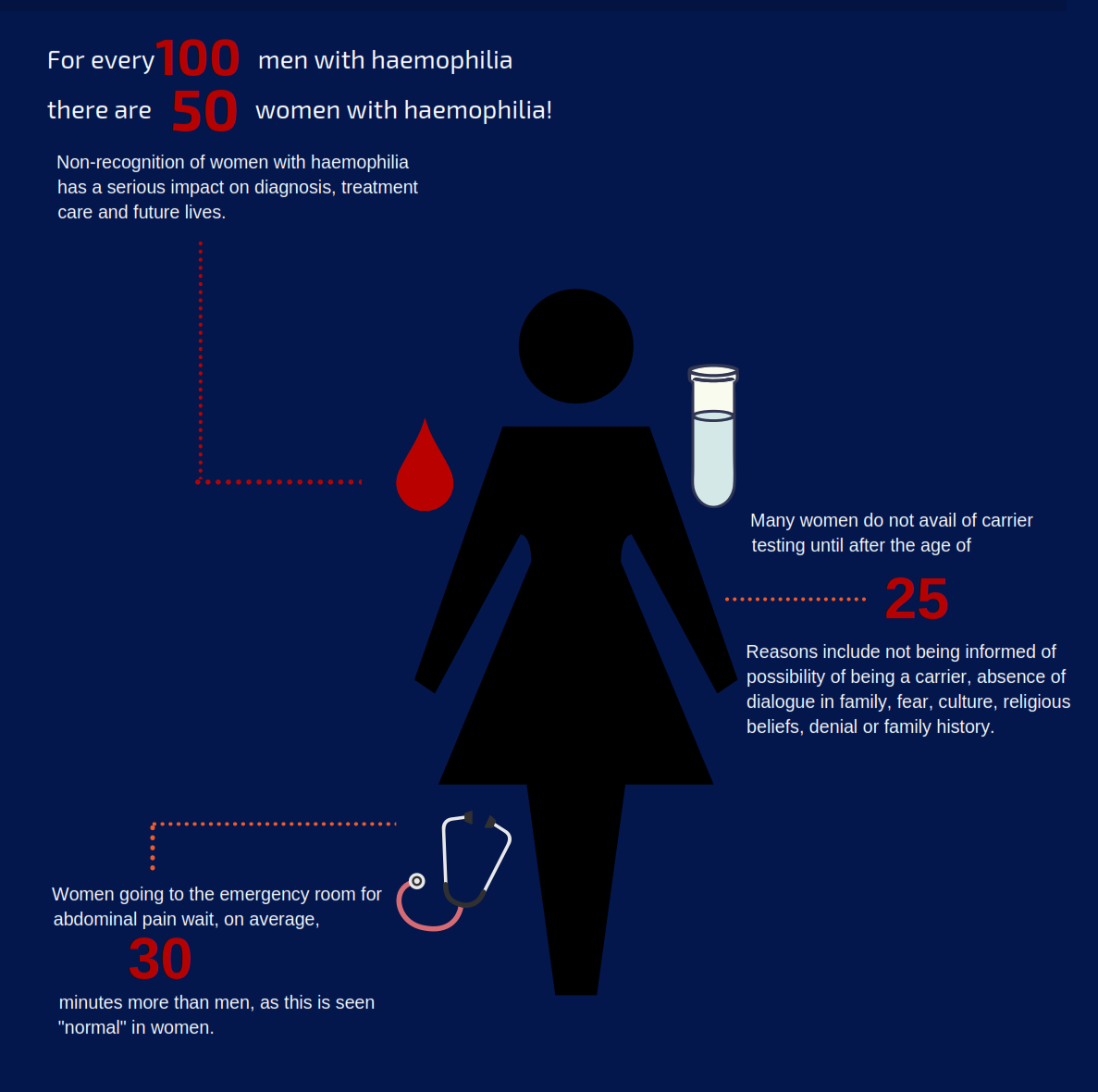 During the Round Table, the EHC unveiled results from its survey on women and bleeding disorders, answered by clinicians, haemophilia treatment centres and over 700 individuals from throughout Europe. Presented by Declan Noone, EHC PARTNERS programme consultant, reports outlined that women with platelet disorders and other factor deficiencies are largely misdiagnosed and face a lack of effective treatment options.
Telling the story behind the numbers, patients also talked about their personal experience with having a bleeding disorder.

Evelyn Grimberg, member of the Dutch Haemophilia Society and the EHC Women and Bleeding Disorders Committee, shared some of the treatment challenges she faced during childhood due to being diagnosed with Glanzmann thrombasthenia: “Starting with the hormones wasn’t that easy, there was a lot of happening in my body because the hormones changed it. I started to realise that I was different from my friends, that it has that much of impact that I couldn’t go to school every day.

Ana Pastor, also member of the EHC Women and Bleeding Disorders Committee, displayed through her story the many sides women face – both as a patient with a bleeding disorder and a mother to a person with haemophilia:

“I have a bleeding disorder but at the time of finding out my son had haemophilia, that completely overtook my life. I was not a person any more, I was just his caregiver – no one could take better care of him then me. At that time, I had profuse nose bleedings but I wasn’t taking care of that because I was concentrated on taking care of my boy. There was a time that I was bleeding every day for 2-3 hours and that is when my mother intervened. Almost shouting and crying she told me “Ana, if you want to take care of your son, you have to take care of you first. And somehow, those words echoed in my head and they made a change.”

Furthermore, Professor Roseline d’Oiron covered some of the less known barriers, such as women not being regularly offered and knowing the benefits of carrying out genetic testing. Even when aware of the chance of being a carrier, women don’t know that there is a risk of intracranial hemorrhage while giving birth and that genetic testing can lead to establishing protocols that secure both the maternal and fetal health during delivery.

The energy and emotion that was part of the Round Table provoked many key takeaways and a call for action to address these issues. Dr Paul Giangrande, chair of the EHC Medical Advisory Group, shared what stood out to him in an interview taken by Naja Skouw Rasmussen, member of the EHC Steering Committee and Women and Bleeding Disorders Committee.

PG: For me, the key message was that there are many unmet needs of women with bleeding disorders. I think the most important thing is to involve and spread the message beyond haematologists. We need to work with gynecologists, for example, to point out that women who have heavy menstrual bleeding may not just have fibroids or other physical causes, but we need to focus on these women and consider doing blood tests.

I think it’s not just the novel therapies we need to look at, I think some of the existing treatments at the moment are clearly not being applied properly to women with bleeding disorders. To start out with, women with factor VIII deficiency who are carriers of haemophilia, why should they not be treated with DDAVP, for example, which I think is widely under-utilized, or in fact factor VIII treatment. We heard from a lady today that she receives fresh frozen plasma, which is, in my view, unforgivable at this time. Also, Professor d’Oiron made a very important point that sometimes women have problems with health insurance because from a health insurance point of view, companies will say “well, why is a woman getting recombinant factor VIII, for instance, which is only meant for men with haemophilia. But I think there are a number of treatments that are simply not promoted for carriers of haemophilia and women with VWD. DDAVP, desmopressin, I think is useful in many cases but it is not widely promoted. Tranexamic acid is also a very useful agent which can control heavy menstrual bleeding in women with bleeding disorders and again, is not used as widely as it should be.

As addressing the above-mentioned issues is a collective responsibility, the EHC is proud to announce that we will be piloting a historic Europe-wide conference for women and bleeding disorders in spring of 2019. We encourage a broad and wide participations from all members of the European bleeding disorders community to discuss steps in moving forward. Details will follow soon!